I’ve loved cartoons for as long as I can remember. They are the first thing I look for while settling into the Sunday paper. I never thought about why I like cartoons so much until I wrote my book. I open my book with a question: What is the Answer to Being More Creative? This cartoon is a perfect illustration for me.

We don’t hit targets that we don’t aim for; i 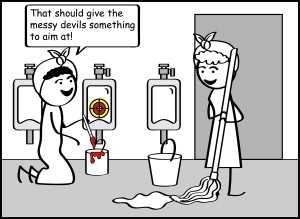 t takes intention and attention (and humor helps). I have spent many years in creative industries, creating something from nothing. My learning model is we have three distinct sources of creativity, our head, heart and gut intelligence centers. One of these centers of intelligence, whether it’s thinking, feeling, or doing, dominates our pattern of creativity. We begin by understanding what our distinct pattern of creativity is from our three intelligence centers. Then we begin to further develop our lesser-used center(s) in our creative process.

How do cartoons help in this process? In the middle ages cartoons were first used to describe a preparatory drawing for a piece of art. Then in the 19th century, cartoons became humorous illustrations in magazines and newspapers, and after the early 20th century, they referred to comic strips and animated films.

This is cartoon history, but for me they give immediate emotional relief– to “lighten up.” My personality can be all too serious. Cartoons often create a needed empathy towards myself and others. The humor results in a guttural laugh that releases built up (and often unconscious) stress in my body. Lastly, the cartoon usually hits my head center’s “inner critic,” causing “it” to shut up… this all allows me to get unstuck and be more creative. So, I’d say for me the general order of a cartoon’s impact is: heart and gut (intersection) then up to my head. But the real beauty of a cartoon’s impact is so fast, so immediate that the order doesn’t really matter much… ultimately it’s a three-center intersection. I think this is why my book is so heavily illustrated, especially with many cartoons. Creating intersections between our intelligence centers is a key to being more creative. 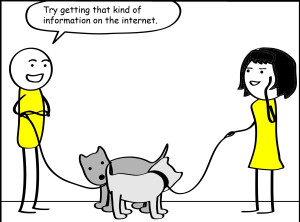 How does this dog walking cartoon hit you— head, heart or gut-wise? Does it create an intersection of center(s) for you?

How about this cartoon, do you ever get pushed/rushed to deliver a creative solution at your job? (Maybe you should show your boss this cartoon). 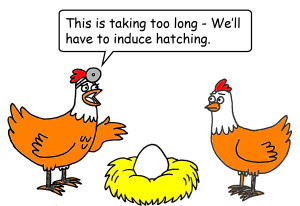 6 thoughts on “Why I love cartoons”