Body art is art made on, with, or consisting of, the human body. The most common forms of body art used to be tattoos or body piercings… but the ever-innovative art world has evolved a long way from just this form.

For me body art must be tasteful–I will highlight three different forms of body art that have awed me of late: 1) Digital body art inspiring natural beauty 2) Healing tattoos and 3) Mimicking body art transformation

Look closely–the following is digital photography art composed entirely of the nude human form. Cecelia Webber is a multimedia artist who spent much of her childhood outdoors. Her website states: “Her deep appreciation for nature, along with her scientific background, give her a deep awareness of organic forms that she draws upon to concoct pieces bearing a unique interplay between colors, shapes, and models’ bodies.”

It is Webber’s flower series (using naked people!) that inspire me most.

My second example is Brian Finn, a tattoo artist who is helping others turn traumatic scars into symbols of strength. Finn who is from Toledo, Ohio, “gives forward” by inking over people’s scars from domestic violence, human trafficking or self-harm—for free.

A tattoo done on scars as a result of self-harm.

A skull and pistons, done on a survivor of domestic violence

Finn is booked with appointments to transform scars. His volunteer work is genius and to be admired–to this the humble artist says, “it’s simply the right thing to do.” He explains that he does it all to help others feel empowered. “It’s just something I can do that won’t take much time that can make a big impact on other people. A tattoo can help disguise the scars, so … it’s like a new chapter.”

My third selection of body art is body painting, which has been around for thousands of years. Every tribe on earth has used clay and other colorful natural pigments to adorn themselves–often in ceremonies. This has evolved into our modern use of cosmetics and makeup, albeit in a more conservative way.

Since the 1960’s there has been a revival of body painting due to changing attitudes of how we view our bodies. My next selection is simply elegant and enchanting–not to be missed!–by Johannes Stötter.

Johannes developed his unique bodypainting technique of his own accord without others’ influence. He joined the international bodypainting community in 2009 at the World Bodypainting Festival in Austria, where he competed in the world championship for the first time. He became world champion in 2012, and the awards (and his originality) just keep coming.

The creativity of the human being and spirit–and the beauty of our bodies–never ceases to amaze and thrill me. What new art forms have you recently discovered that inspire you? Rock on art world into 2017–more originality to come!

Sometimes when I get blocked creatively I look around for inspiration. I found two artists who got me moving. The first is Dutch artist Theo Jansen’s living and breathing sculptures — I must say this utube of his astonishing work is one of the most eerily awe-inspiring things I’ve seen in awhile! I think that’s because it stimulates all three of my intelligence centers: head, heart and gut. He calls his art “the Strandbeests.” These walking sculptures are made of lightweight plastic tubing, that “feed” off wind-power and spend their natural lives frolicking in the tide-lines of northern beaches! Yes, this is “gut” creativity at its best!

Jansen’s designed intake pipes detect when his creatures venture too far into dunes or water, causing them to careen the other way to keep themselves safe. Simply brilliant creations!

The other artist whom inspired me this week is Thomas Dambo. He makes BIG art projects from trash. Most of us dive into clean pools, he dives into dumpsters around Copenhagen, Denmark. He has fun with trash and inspires others to use recycled materials for works of art.

In 2015 Thomas Dambo and his team made the recycled sculpture Simon Selfmade in the town of Tilst outside of Aarhus, Denmark. Unfortunately a big hurricane hit Aarhus shortly after, and Simon was completely destroyed. A 14 year old girl named Anine was really sad about losing Simon– so she created a Facebook page to raise funds to have Simon rebuilt, which she accomplished in only four days.

The new sculpture is now finished (see video for the process) and includes a new friend to keep Simon company. The name of his new friend is– of course– Anine.

All of Dambo’s sculptures are made solely from local scrapwood and recycled materials, some are placed in hidden locations like Oscar under the bridge. This invites viewers to go on a treasure hunt, to see both the sculpture and hidden gems in nature. 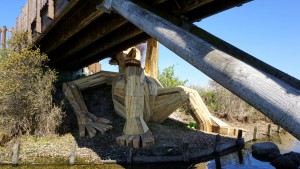 Oscar under the bridge is made from scrapwood and broken pallets from local industries. Here are a few more of Dambo’s unique sculptures. 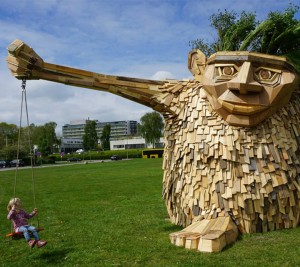 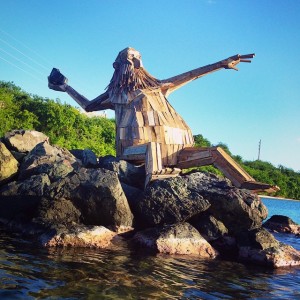 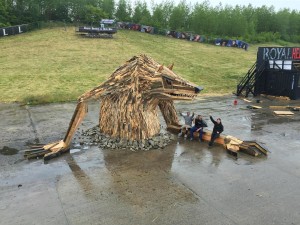 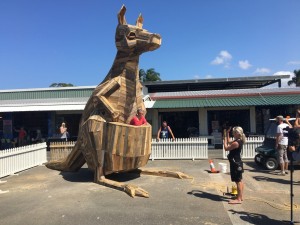 Not only are Dambo’s sculptures made of recycled materials, but as you can see, they are interactive (provoke our gut center), always inviting us to play! And–of course–play stimulates creativity.

How do these works stimulate your creativity–from your head, heart and gut’s perspective?

Thanks for reading my post. I am an organizational and business consultant living in the mountains of Santa Fe, New Mexico with my husband and dogs. My core message of everyone is creative resonates with people of all ages and walks of life. I invite all to become the best version of themselves in my new book and find true meaning by pursing long term creative quests.